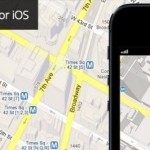 Google has updated its Google Maps SDK for iOS to version 1.1, opening up its API to all third-party developers who now have the ability to build iOS apps with Google Maps embedded. The update also adds support for ground overlays, gesture controls, and more.

Google launched its Google Maps SDK for iOS back in December — when it launched its much-anticipated Google Maps app for the iPhone. However, for developers to use the SDK, they previously had to register their interest, and then wait in line to be approved. This process has limited the number of iOS apps that have Google Maps built-in.

Now that’s all changed, however. With version 1.1 of the Google Maps SDK, developers are free to download the software and embed Google Maps into their app. Not only can they embed Maps, but they also now have the option to choose whether address links within their apps open in Apple Maps or Google Maps.

The update also “includes support for ground overlays, gesture control and geodesic polylines,” according to Google’s Geo Developers Blog. You can watch a demonstration of the SDK capabilities below.